Absorption In acoustics, the energy of sound waves being taken in and trapped within a material rather than being bounced off or reflected. Materials are rated in terms of their ability to absorb sounds.

Rates a ceiling's efficiency as a barrier to airborne sound transmission between adjacent closed offices. Shown as a minimum value, previously expressed as CSTC (Ceiling Sound Transmission Class). A single-figure rating derived from the normalized ceiling attenuation values in accordance with classification ASTM E 413, except that the resultant rating shall be designated ceiling attenuation class. (Defined in ASTM E 1414.) An acoustical unit with a high CAC may have a low NRC. 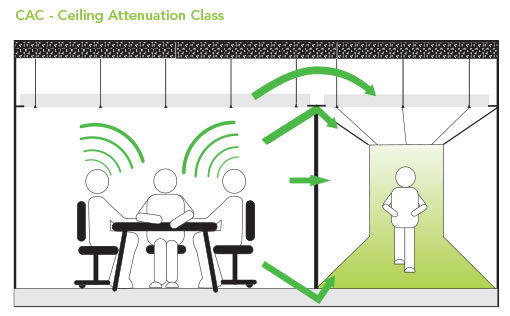 Noise Reduction Coefficient (NRC) - Average sound absorption coefficient measured at four frequencies: 250, 500, 1,000 and 2,000 Hz which rates how well a ceiling or wall panel absorbs sound. NRC is the fraction of sound energy, averaged over all angles of direction and from low to high sound frequencies that is absorbed and not reflected.

A material's sound absorbing properties are expressed by the sound absorption coefficient, NRC, which ranges from 0 (total reflection) to 1.00 (total absorption).

Time required for a sound to decay to a value one millionth of its original intensity or to drop 60 decibels.

Thermal resistance is the temperature difference, at steady state, between two defined surfaces of a material or construction that induces a unit heat flow rate through a unit area, K⋅m2/W.